Eureka Springs and the Buffalo River 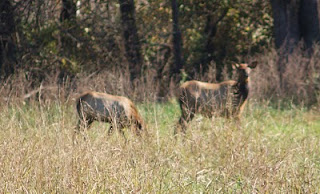 Prime Elk Viewing Season Fast Approaching Late August is the beginning of prime elk viewing season, and it extends nearly until the end of the year. It has distinct stages. Preparations are now underway for the elk rut just 6 weeks off. Learn More on the Buffalo River

Bull elk are now nearing the end of the regrowth of antlers for the 2010 season. This new growth continues until about mid-August when they begin to "scrape" the velvet off their antlers in preparation for the rut. Viewers will see ribbons of half-scraped velvet hanging from their antlers until the process is complete. Newly scraped antlers are bone white and quickly season to a deep brown by the end of August for most animals.
The annual elk rut is one of the biggest tourism shows in Arkansas. It begins roughly the second week of September, peaking roughly for the two week period from the last week in September to the first week in October, when the bull elk battle to establish breeding rights